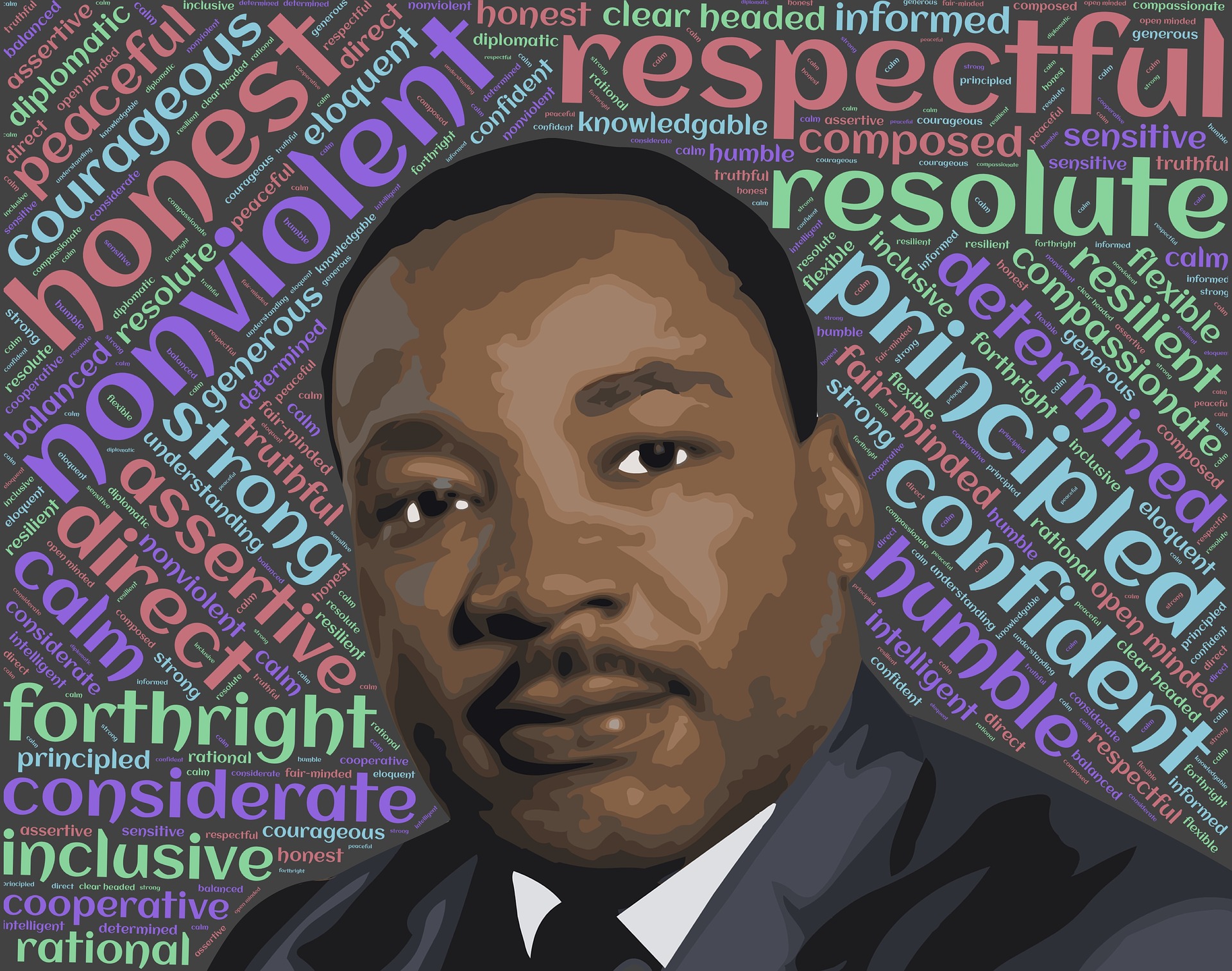 “I have a dream that my four little children will one day live in a nation where they will not be judged by the color of their skin but by the content of their character.”

Martin Luther King, Jr. (1929-1968), American clergyman and Nobel Prize winner, one of the principal leaders of the American civil rights movement and a prominent advocate of nonviolent protest was born on January 15, 1929, the second of three children. His father was a Baptist minister and served as pastor of a large Atlanta church, Ebenezer Baptist, which had been founded by Martin Luther King, Jr.’s, maternal grandfather. Martin was ordained as a Baptist minister at age 18.

He attended public elementary and high schools as well as the private Laboratory High School of Atlanta University. King entered Morehouse College at age 15 in September 1944 as a special student. He received a bachelor’s degree in sociology in 1948. In the fall of that year, King enrolled at Crozier Theological Seminary in Chester, Pennsylvania, and received his Bachelor of Divinity degree three years later. King’s public-speaking abilities-which would become renowned as his stature grew in the civil rights movement-developed slowly during his collegiate years. He won a second-place prize in a speech contest while an undergraduate at Morehouse, but received Cs in two public-speaking courses in his first year at Crozer.

By the end of his third year at Crozer, however, professors were praising King for the powerful impression he made in public speeches and discussions. King was awarded a doctorate by Boston University in 1955. Throughout his education, King was exposed to influences that related Christian theology to the struggles of oppressed peoples. At Morehouse, Crozer, and Boston University, he studied the teachings on nonviolent protest of Indian leader Mohandas Gandhi. King also read and heard the sermons of white Protestant ministers who preached against American racism. Benjamin E. Mays, president of Morehouse and a leader in the national community of racially liberal clergymen, was especially important in shaping King’s theological development.

While in Boston, King met Coretta Scott, a music student and native of Alabama. They were married on June 18, 1953 and would have four children. In 1954 King accepted his first pastorate at the Dexter Avenue Baptist Church in Montgomery, Alabama, a church with a well-educated congregation that had recently been led by a minister who had protested against segregation.

He had been a resident in Montgomery less than one year when Rosa Parks defied the ordinance regulating segregated seating on municipal transportation. King was soon chosen as president of the Montgomery Improvement Association (MIA), the organization that directed the bus boycott. King’s serious demeanor and consistent appeal to Christian brotherhood and American idealism made a positive impression on whites outside the South. Incidents of violence against black protesters, including the bombing of King’s home, focused media attention on Montgomery.

In February 1956 an attorney for the MIA filed a lawsuit in federal court seeking an injunction against Montgomery’s segregated seating practices. The federal court ruled in favor of the MIA, ordering the city’s buses to be desegregated, but the city government appealed the ruling to the United States Supreme Court. For 12 months, makeshift carpools substituted for public transportation. At first, the bus company scoffed at the black protest, but as the economic effects of the boycott were felt, the company sought a settlement. Meanwhile, legal action ended the bus segregation policy. On June 5, 1956, a federal district court ruled that the bus segregation policy violated the Fourteenth Amendment, which forbids the states from denying equal rights to any citizen. The boycott ended, and it thrust into national prominence a person who clearly possessed charismatic leadership, Martin Luther King, Jr.

By the time the Supreme Court upheld the lower court decision in November 1956, King was a national figure. His memoir of the bus boycott, Stride Toward Freedom (1958), provided a thoughtful account of that experience and further extended King’s national influence.

King, urged by prominent black Baptist ministers in the South to assume a larger role in the struggle for black civil rights following the successful boycott, accepted the presidency of the newly formed Southern Christian Leadership Conference (SCLC) -an organization of black churches and ministers that aimed to challenge racial segregation. As SCLC’s president, King became the organization’s dominant personality and its primary intellectual influence. He was responsible for much of the organization’s fund-raising, which he frequently conducted in conjunction with preaching engagements in Northern churches.

In January 1960, he resigned his Montgomery pastorate and moved to Atlanta, Georgia, where the SCLC had its headquarters. SCLC sought to complement the NAACP’s legal efforts to dismantle segregation through the courts, with King and other SCLC leaders encouraging the use of nonviolent direct action to protest discrimination. These activities included marches, demonstrations, and boycotts. The violent responses that direct action provoked from some whites eventually forced the federal government to confront the issues of injustice and racism in the South. King’s challenges to segregation and racial discrimination in the 1950s and 1960s helped convince many white Americans to support the cause of civil rights in the United States.

In 1963 Wrote ‘Letter from Birmingham Jail,’ arguing that it was his moral responsibility to disobey unjust laws, in the every year he had Delivered his ‘I Have a Dream’ speech to civil rights marchers at the Lincoln Memorial in Washington, D.C. In 1964, King became the first black American to be honored as Time magazine’s Man of the Year and also won the Nobel Peace Prize in Oslo, Norway; Accepting the award on behalf of the civil rights movement, Dr. King said, “Sooner or later, all the people of the world will have to discover a way to live together in peace, and thereby transform this pending cosmic elegy into a creative psalm of brotherhood.”. King’s efforts were not limited to securing civil rights; he also spoke out against poverty and the Vietnam War; throughout 1966 and 1967 King increasingly turned the focus of his civil rights activism throughout the country to economic issues.

He began to argue for redistribution of the nation’s economic wealth to overcome entrenched black poverty. In 1967 he began planning a Poor People’s Campaign to pressure national lawmakers to address the issue of economic justice. After his assassination in April 4, 1968 at the Lorraine Motel in Memphis, Tennessee by a sniper then realized named James Earl Ray and sentenced for 99 years imprisonment. The FBI had believing that King had been associating with Communists and other radicals, but King became a symbol of protest in the struggle for racial justice; and at last President Ronald Reagan signs legislation designating Martin Luther King Jr.’s birthday a national holiday in 1983 (the 3rd Monday of every new year).

King’s nonviolent doctrine was strongly influenced by the teachings of Indian leader Mohandas Gandhi. Unlike the great majority of civil rights activists who have regarded nonviolence as a convenient tactic. King followed Gandhi’s principles of pacifism. In King’s view, civil rights demonstrators, who were beaten and jailed by hostile whites, educated and transformed their oppressors through the redemptive character of their unmerited suffering.

The SCLC helped the students organize the Student Nonviolent Coordinating Committee (SNCC), at a meeting held at Shaw University in Raleigh, North Carolina, to coordinate the protests. As a direct result of the sit-ins, lunch counters across the South began to serve blacks, and other public facilities were desegregated.

An important interplay of action and response developed between government and civil rights advocates. And it was this interplay that did so much to quicken the pace of social change.

The most critical direct action demonstration began in Birmingham, Alabama, on April 3, 1963, under the leadership of Dr. King and the Southern Christian Leadership Conference. The demonstrators demanded fair employment opportunities, desegregation of public facilities and the creation of a committee to plan desegregation. King was arrested and, while imprisoned, wrote his celebrated “Letter from a Birmingham jail” to fellow clergymen critical of his tactics of civil. King was arrested more than seven times during his many civil rights campaigns throughout the South.

On August 28, 1963, more than 250,000 Americans from many religious and ethnic backgrounds converged on Washington, staging the largest demonstration in the history of the nation’s capital. The orderly procession moved from the Washington Monument to the Lincoln Memorial, where King electrified the demonstrators with an eloquent articulation of the American dream (I have a Dream) and his hope that it would be fully realized. In one of the most famous passages from the speech, King declared: