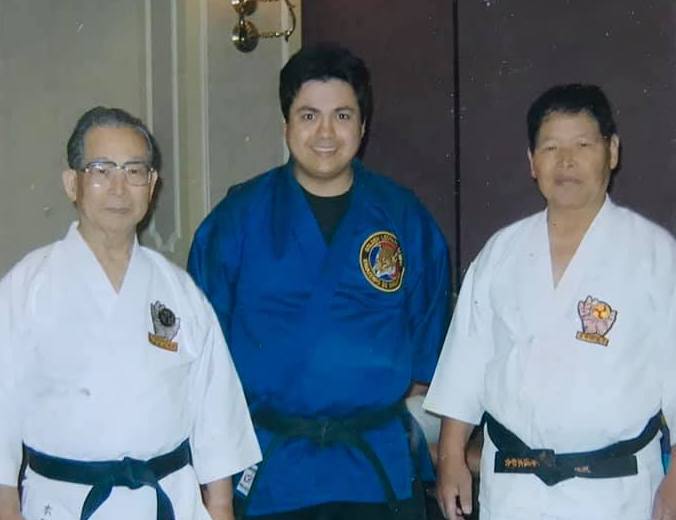 In the study of Okinawan Karate history, Choki Motobu stands out as a legendary figure. However, this golden age of Karate was nearly a hundred years ago, any chance of me being near such heroes has always been fleeting. That is until Prof. Kimo Ferreira and Prof. Tom Ingargiola invited me to their Kempo seminar in Las Vegas. The guest of honor was none other than Choki Motobu’s son, Chosei Motobu sensei.

“Motobu Choki (1870–1944) was an Okinawan karateka from Akahira Village in Shuri, Okinawa, capital of the Ryukyu Kingdom when he was born. His older brother Motobu Choyu was also a noted karateka.

His father, Lord Motobu Choshin (Motobu Aji Chosin) was a descendant of the sixth son of the Okinawan King, Sho Shitsu (1629–1668), namely Sho Koshin, also known as Prince Motobu Chohei (1655–1687). Choki was the third son of Motobu Udun (“Motobu Palace”), one of the cadet branches of the Ryukyuan royal family. [wikipedia]”

Chosei Motobu sensei taught the class with his friend, Inaba sensei. Neither men spoke English, so Keiko Ferreira translated. The whole experience was surreal and exciting. Though freshly 81 years old, Motobu sensei moved with assured quickness and intent. Fifty years of teaching shows in all his movements.

Prof. Tom opened the lass up with warm-up exercises and shadow boxing, but he quickly transitioned into several new techniques focusing on principles. He said students should avoid backing up into the opponent’s power area; instead, one should move to a safe location like the side or behind the opponent.

For those unfamiliar with Prof. Kimo Ferreira, he studied Karazenpo Go Shinjutsu (KGS) under Grandmaster Walter Godin, the co-founder of KGS with Grandmaster Sonny Gascon. Prof. Kimo emphasizes the jujitsu aspects of Kempo, showing bunkai for several katas. His techniques favor absorbing principles and striking pressure points. His introduction to the Kake-te drill was the highlight of his section. Intermediate classes will use this drill. It’s a tremendous pre-sparring drill for developing combinations, accuracy, and muscle memory.

Motobu Sensei demonstrated Naihanchi One and Two, our Monkey Dance 11 and 12, from his family’s system. He said Naihanchi three was a later addition and not part of the original catalog of kata. Motobu Sensei began teaching Ju Ni Hon that is a set of 12 combinations. These techniques are similar to defense maneuvers or Kempo defense techniques, except he calls them Kumite techniques.

The seminar closed with his introduction to the Motobu-Ryu Palace Hands personal style, which he learned from his uncle. The Motobu family worked for the King of Okinawa before Japan annexed Okinawa. His ancestors were the private bodyguards and fighting instructors for the palace guards. The Palace Hands were the training sequenced used in those lessons.

With Prof. Kimo’s help, Motobu sensei also noted that none of his father’s school’s records listed Mitose as a student. There wasn’t any evidence in the rolls, and no one knew of him. This part of Kempo’s history is in dispute with this revelation.

What is the take-away of this super seminar?

This event was a great mix of new and old martial arts. Both my training lineages, Shaolin Kempo Karate, and Karazenpo Go Shinjutsu, were featured in the seminar. Overall, I recommend that students and instructors should attend conferences. They provide opportunities to learn new material, unlock old material, and making new friends. Train hard, train strong, and train with intent.